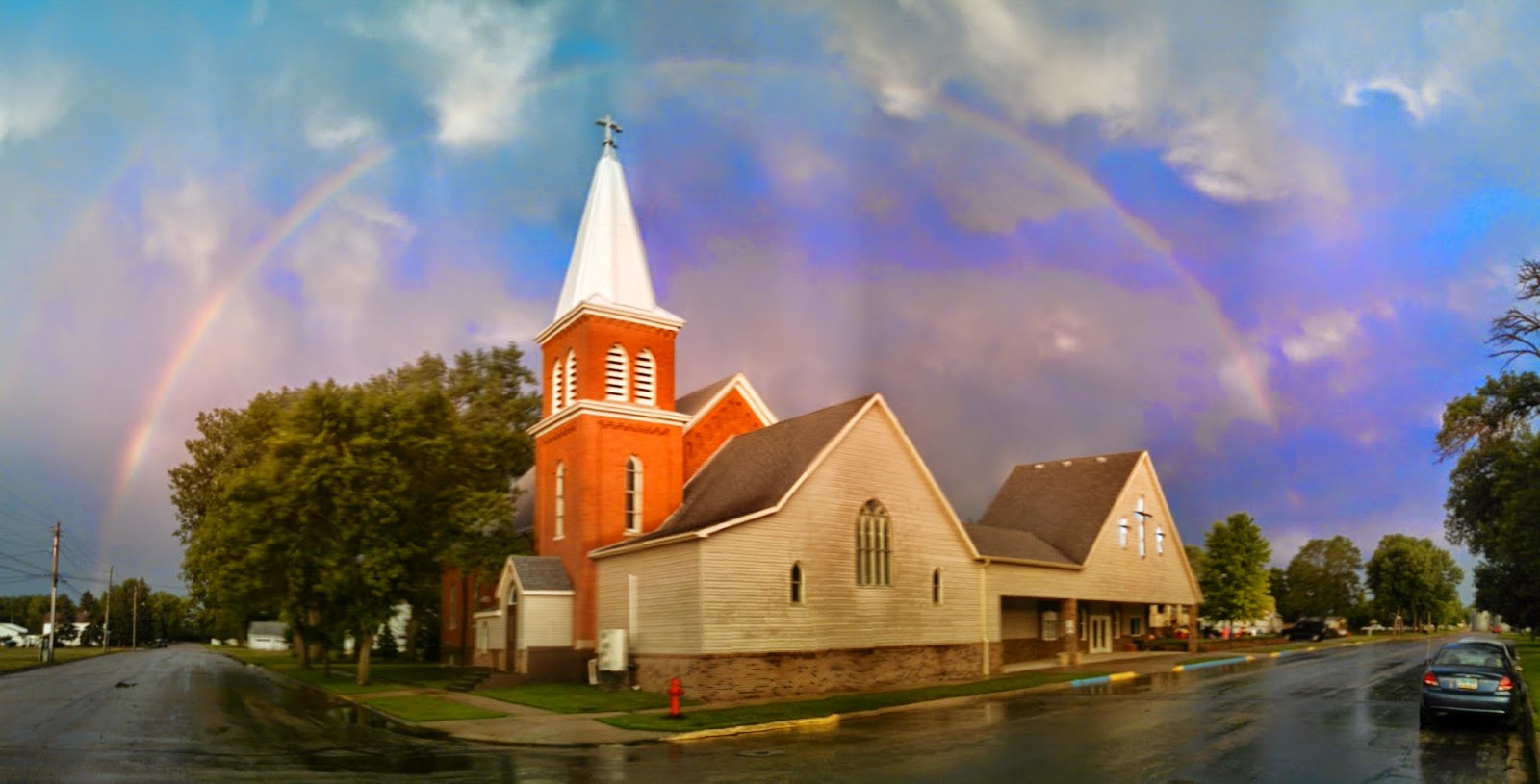 Although the founding date of Immanuel Lutheran Church is 1902, there were beginnings even back to the early 1890's.  There were service held in an old public school building in teh section known as "Hunger Flats".  Pastors T. Hinck, Great Bend, and F. Oberheu of rural Lidgerwood conducted services there until the time of the formation of Bethlehem Lutheran Church in the Town of Greendale.  Pastors F. Oberheu, J. Cloeter, and R. Hilgendorf served Bethlehem.

In 1901 the Rev. F. Wegner began work in the town of Hankinson, with services being held at the home of Carl Pasbrig, and later in two rooms over a butcher shop.  Chairs were borrowed from the town hall and from Wiperman Furniture Store.  Because the rooms were unheated, they became uncomfortably cool as fall came on.  Since most of those who attended the services were already members of St. John's Belford Twp., and of Trinity, Great Bend, and because there was only the remote possibility of obtaining a resident pastor, the organizing of a congregation in Hankinson was deemed not advisable.

The Rev. Jacob Koerber was sent by the District Mission Board to organize a congregation in Hankinson.  He arrived in the fall of 1902; and after many mission calls and holding services for a few months, Immanuel Lutheran Church of Hankinson was organized December 7, 1902.  Signing the constitution as charter members were: August Eggert, George Kretchman, Julius Westphal, Frank Schroeder, Frank Budack, Otto Ponath, and Fred Klawitter.  Frank Budack was chosen as the first elder.

On January 18, 1903 the Bethlehem congregation of Greendale Twp. held a meeting and decided to dissolve as a separate congregation and to merge with Immanuel in town.  The following men signed the constitution on that day and may well also be considered charter members of the congregation.  Fred Pribbernow, William Wurl, John Buck, Karl Laboda, and Albert Medenwaldt.  Edward Ernst and Herman Hoefs from the town also signed the constitution.  Elected as elder was Fred Pribbernow, and as secretary, Henry Behle.

The first services of the fledgling congregation were held in a building owned by Carl Pasbrig on the south side of town.  The building was then purchased from him and moved to the north side, being located where the parsonage stood through 2015.  The congregation grew rapidly, so the need for a larger building was apparent; and the congregation needed to be incorporated.  On May 17, 1903, this was done.  Julius Westphal, Frank Budack, and Fred Pribbernow were the first trustees and incorporates.

At a cost of about $1,500.00 a church building measuring 36X20 was erected, and it was dedicated on December 6, 1903 with Pastors T. Hinck, Great Bend, and J. Cloeter, rural LIdgerwood preaching for the dedication.

At this time Immanuel needed support from the District mission treasury.  During the pastorate of Rev. Koerber, the congregation rented a parsonage.  In May of 1905, Rev. Koerber was granted a peaceful dismissal to another charge.  Later in 1905, Rev. F. Zersen of Sykeston, ND was installed as the next pastor of the congregation.  During the fall of 1905, the erection of a school building was considered, but this was postponed for a year when there would be more children for instruction purposes.

In the spring of 1906 the congregation purchased two lots, a house and a stable from George Bladow for $1,500.  The property, which became the home of Mrs. Regina Ahrens, served as parsonage until 1919.  It was at this time that land was purchased north of Hankinson to serve as the congregation's cemetery.

Pastor Zersen was granted a peaceful dismissal on August 11, 1907, after which there was an extended vacancy.  The Rev. R. Hilgendorf of St. John's Belford Twp., served during this time.
On the sixth call extended the Rev. J.P. Klausler of Kulm, ND accepted.  He was installed May 3, 1908 and served the congregation faithfully and well until September 12, 1941, when he and his wife both were killed in an auto accident near Victor, SD.  The lord visibly blessed the congregation during the pastorate of Rev. Klausler.

Beginning with 1909 the congregation became self-sustaining, and in 1910 it joined the Lutheran Church-Missouri Synod as a member.  During 1910 plans were made to build a larger church.  The building was to be 40X60 with 16' eaves, with a 75' tower, able to carry two bells, and was to have a balcony and chancel.  The erection of the church proceeded with remarkable speed.  Members donated much of the hauling so that the cost of the building was kept down to $14,700.00.  At that time there was no basement underneath the church.  Ground was broken June 7, and the cornerstone was laid June 26, and dedication services were held Decmeber 7, 1910.

After the indebtedness on the church building had been retired in 1919, plans were made for the erection of the old parsonage.  In January 1920, it was reported that the parsonage had cost almost $12,000.00.

1927 marked the silver anniversary of Immanuel's existence.  On Thanksgiving Day of that year, the 25th anniversary was celebrated by dedicating the two manual Wangerin Pipe Organ.  The cost, almost $3,500.00, was solicited personally by the pastor from the members.

During the Depression of the 1930's the congregation encountered financial difficulties, but already in 1934 the matter of placing a basement underneath the church building was discussed.  This was not carried out until 1941, with the dedication taking place in February 1942.  The approximate cost of this project was $5,000.00.  It was in connection with the completion of this basement project that Pastor and Mrs. Klausler met their deaths in that tragic auto accident.

The vacancy, served by Rev. W. Cordts, lasted until December 1941, when Pastor Gerhard C. Michael was installed as the fourth pastor of Immanuel.  All indebtedness was retired in 1944, and the congregation was seriously considering the establishing of a Christian day school.  In April of 1945, it was resolved to begin in the fall of that year in the old church building.  Mr. Wm. E. Melchert was installed as the teacher of the three upper grades.  A teacherage was purchased in January 1946, and the six lots north of the church were purchased.  During the fall of 1949 a committee was elected to present plans for the erection of an adequate educational building.  The congregation decided to build in the spring of 1951.  Groundbreaking was May 20, and the cornerstone was laid July 15, and dedication day was December 30, 1951.  The building cost about $64,000.00 equipped.  In September of 1952, the school had an enrollment of 60 pupils.  Miss Norma Freudenburg of Madison, NE taught the lower four grades.  Some of the other teachers who served were:  Mrs. N. Medenwaldt, Lowell Young, Joyce Poppel, Elois Moeller, Glen Zorn, Corrine Brockopp, Eunice Kurth, Allen Geil, and Mrs. Carol Trittin.  They taught as many as 66 pupils in the eight grades until 1968 when the Christian day school was closed.  Immanuel's Sunday school has also used the building since its dedication until finally it was sold.  In May 1957, Pastor Michael was peacefully dismissed to accept a call to a Minnesota congregation.  The Rev. Edmound Zapf was installed in March of 1958 and was pastor until August of 1958 when he accepted an instructorship at Concordia College, Milwaukee, WI.  Pastor Otto Truog was installed on February 1, 1959 and served until June 1963 when he accepted a call to Papillion, NE.  After an extended vacancy of 27 months, during which time 23 calls were sent, the Rev. August Mommens of New Rockford, ND was installed September 19, 1965 and served until June 1968.

The pastoral office was vacant in both Immanuel of Hankinson and St. John's of Belford Twp., and during this double vacancy a dual parish was formed to which the Rev. Norman Scincebaugh was called.  He was installed JUne 8, 1969 as the pastor of the parish.  In December of 1973 he was given a peaceful dismissal to assume the duties of the Executive Secretary of the North Dakota Distric.  The Rev. Henry Buchholz of Warren, Minnesota was installed as pastor on September 8, 1974.

For a number of years there had been a discussion of the possibility of redecorating the interior of the church.  The redecorating committee presented the results of their research and study to the congregation in the spring of 1975, and the congregation voted to authorize the work to be done.  This included new wall covering, carpeting, light fixtures and wiring, remodeling the chancel area, replacing the heating system, covering the cross beams with wood, and insulating the roof.  Coupled with the redecorating was the building of a 24x48 addition to the west end of the church.  Included in the addition were a fellowship room and church office on the nave level and a kitchen and restrooms in the basement level.  The total cost of the redecorating, remodeling and the new addition was approximately $75,000.00.  This addition was dedicated on November 14, 1976.
On September 18, 1977, the congregation observed its 75th anniversary with a morning and afternoon service.

In November of 1978, Rev. Buchholz was granted a peaceful release.  Following a 16-month vacancy, which was served by Rev. D. Lehfeld of Lidgerwood, and after nine calls were sent, Rev. J.J. Jording, St. Thomas, ND accepted the call and became the pastor of Immanuel in March of 1980.
In 1990 the outside of the church building was tuckpointed.  The in August of 1992, new shingles were added to the roof.  It was during this shingling process that the need to redecorate became necessary.  About halfway through the shingling process a storm with high winds and bringing about four inches of rain struck.  The result was that rainwater entered the church and cuased the textured paper on the walls and ceiling to fall down.  The result at first seemed to be a disaster; however, as a result of this incident, the church was redecorated.  Services of praise and re-dedication were held on September 18, 1994, with former pastors as guest speakers.

On July 30, 2000, Rev. H.J. Jording retired from the Holy Ministry.  Following an 8-month vacancy, which was served by Rev. D. Wanderer of Rural Lidgerwood, Pastor Jonathan Vanderhyde, Kemmerer, Wyoming, accepted the call and became the pastor on April 1, 2001.

In 2003 Pastor Vanderhyde was dismissed.  A vacancy was served by Rev. J. Crosswhite of Lidgerwood, until in lase 2003, Pastor Leo Dietemeyer accepted the call to serve, and was installed on August 24, 2003.

In June of 2003, raw sewage backed up into the church basement.  A plan was developed to use the opportunity to build a new parish hall and classroom addition to the church.  The 52x87 foot addition broke ground in March of 2004 and was finished later that year.  It was completed at a cost of approximately $400,000.00.

The worship services were not the only times when God's people were in contact with his power in Word and Sacrament.  Through the dedicated efforts of the teachers in the Christian day school, the Sunday school, and the confirmation classes, many have learned to know and be loved by their Savior Jesus.  Their faith and the faith of others grew in teh organization sof the congregation such as the Ladies Aid, The Ladies Guild, the Lutheran Laymen's Leauge, the LWML, the LYF, Bible Study Groups, giving opportunities to grow in the knowledge of our Lord and Savior Jesus Christ.

Although through the years there were difficult building projects, the vastly more important building was done by the Holy Spirit through Word and Sacrament, as the congregation was built upon the foundation of Christ.  Throughout the years, hundreds of people have been encouraged, comforted, and given peace of mind and heart by the Word of God.  Immanuel means God with us.  And God has certainly been with us, with His grace and mercy, building and strengthening the hearts and faith of those involved, building his kingdoms of grace and glory.

To God alone be all glory. 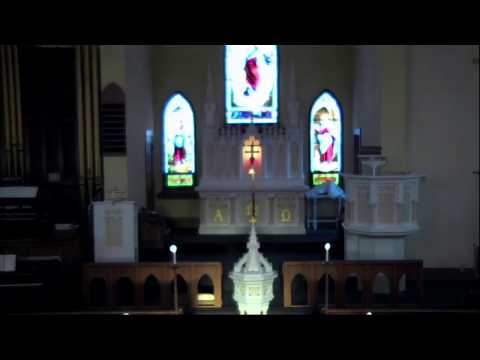